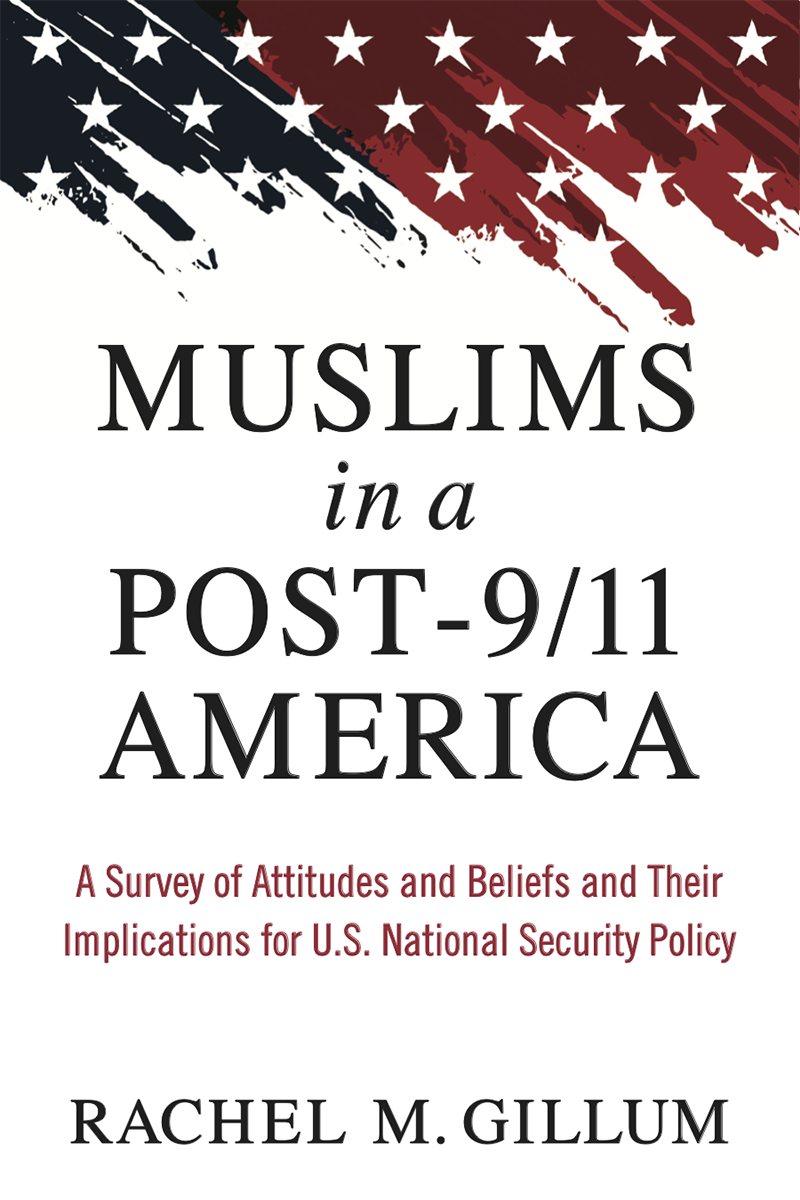 A Survey of Attitudes and Beliefs and Their Implications for U.S. National Security Policy
Published August 2018
Order nowVisit publisher
Get 30% off when buying through publisher with code "UMGILLUM" before October 31st!

​Despite these realities, negative political rhetoric around Muslim Americans persists, and many Muslims participating in this study have experienced discrimination. The findings suggest some of the policies designed to keep America safe from terrorist attacks may have eroded one of law enforcement’s greatest assets in the fight against domestic violent extremism—a relationship of trust and goodwill between the Muslim American community and U.S. government entities. Gillum argues for government policies and law enforcement tactics that will bring more nuanced understandings of this diverse category of Americans and build trust, rather than alienate Muslim communities.

This work makes a significant contribution to the field, not only through its substantive findings on trust in law enforcement but also because it is one of the few nationally representative surveys of Muslim Americans. The insights in this book will help us assess where we are as a nation and where we need to go.‍

Gillum provides a compelling, well-researched, and sophisticated understanding of the distressing impact Islamophobia has had on the Muslim American community. Gillum engages American popular and mainstream convictions that feed into today’s existing Islamophobic climate. Drawing on original surveys of Muslim and non-Muslim Americans, Gillum finds that there are very few differences between Muslim and non-Muslim Americans on variety of attitudes related to violence, terrorism, and patriotism. This is an excellent and timely book which should be widely read.

Rachel Gillum’s excellent book could not be more timely and important at this stage in American politics. It is the definitive account of who American Muslims are and what they think, a much-needed antidote to prejudice and misconception, and a clear warning about the unintended consequences of counterterrorism policies.

Muslims in a Post- 9/11 America is a lucid examination of the attitudes of American Muslims toward U.S. counterterrorism and other policies that have heightened levels of racialization, surveillance, and discrimination.  Drawing on empirical evidence, Gillum argues that policies fueled by religious profiling and discriminatory suspicion undermine their own efficacy. The book provides important contributions to the study of American Muslims, their experiences, and how the U.S. government has viewed them and targeted them unjustly.

This is the first study that I have seen that has parsed generational and ethnic/racial differences in attitude among Muslim Americans rather than viewing these communities as a monolith . . . This book combines both the statistical angle and interviews in an illuminating way.

‍Rachel Gillum combines sophisticated survey analysis and in-depth interviews to examine one of the most important civil rights issues in the United States today: the widespread and unfair treatment of Muslim Americans as potential terrorists.